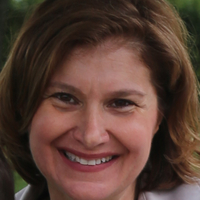 Biography
Maria Girone graduated from the University of Bari, Italy. She was awarded her Ph.D. in high-energy physics in 1994. Girone became a research fellow with the ALEPH experiment performing analysis and serving as accelerator liaison. Later, she developed detector hardware for the LHCb experiment as a research associate at Imperial College London. In 2002, Girone joined the IT Department as an applied scientist and CERN staff member. Two years later, she was appointed as section leader and service manager of the Oracle database services for the LHC experiments. She became deputy group leader of the CERN IT Experiment Support group and task leader within the EGI-InSPIRE project in 2009. In 2012, Girone became the founding chair of the WLCG Operations Coordination team, responsible for the core operations and commissioning of new services in the WLCG. In 2014, she was appointed the Computing Coordinator for the CMS Experiment at CERN for two years. As coordinator, Girone was responsible for 70 computing centers on five continents and more than 100 FTE of effort yearly to archive, simulate, process and serve petabytes of data. Later, Girone joined the management team of CERN openlab, taking over the position of CTO as of January 2016.
Presentations
Keynote
Tackling tomorrow’s Computing Challenges today at CERN